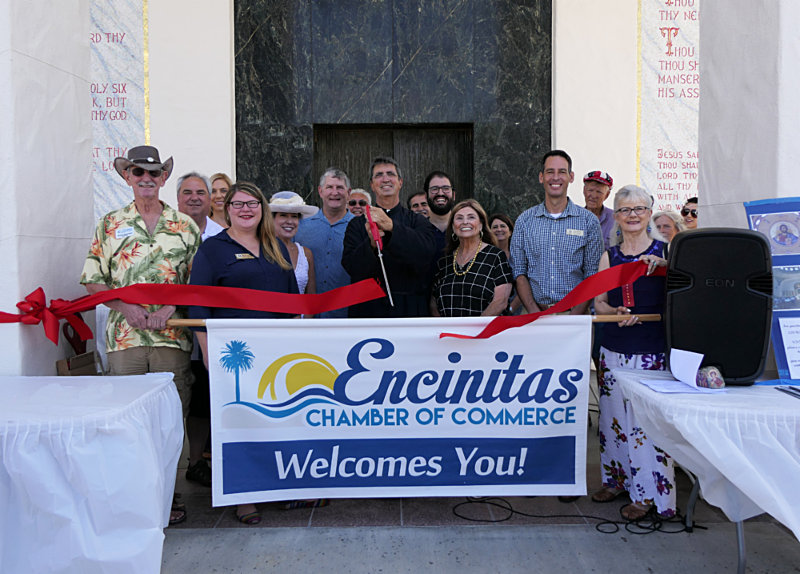 Perhaps best known for its stunning gold dome which displays a cross caused by the rays of the shining sun, the Church has been a landmark and staple of the community for 40 years.
In 1978/79 a small group of families formed the first  Greek Orthodox Church in North County. The community has  now grown to over 400 families. When they first started out, services were held in the cafeteria of a school in nearby  Solana Beach. Through an annual Greek Festival, they worked to raise money to purchase property in Cardiff where they would build their sanctuary. The Cardiff Greek Festival, held annually the first weekend after Labor Day, typically draws over 10,000 people to the Church site which is located next to Mira Costa College.
The Church actively supports the community by hosting  Boy Scout Troop 2000, and a variety of events through the year such as Bach Collegium (including Handel’s Messiah),  San Diego Early Music Society concerts, Baroque Soloists, and the North County Music Meetup. Hands of Peace hosts workshops and its annual cultural night at the Church. The Church prepares meals for God’s Extended Hand and Two Fishes. In addition, the Church’s chapter of Philoptochos raises funds in support of many local, national, and global charities.
The Church also works with the annual Century Bike Ride, hosts Greek Dance classes, runs a Greek Language School, and founded Shining Cross Academy which provides pre-school and kindergarten at an affordable cost for local families. This fall they plan to open Cardiff Ayre Gallery to provide a space for  local artists to show their work.
For the past 40 years the Church has owned and operated  30 apartments on their campus. The residents are senior citizens and the rents are kept below market rates to help make them affordable. The Church intends to build more affordable housing soon. They also have plans for a community hall and recreational space. The Church is open to people of all backgrounds.
Anyone who wants to learn more about the  Orthodox Christian faith or the Church is welcome.